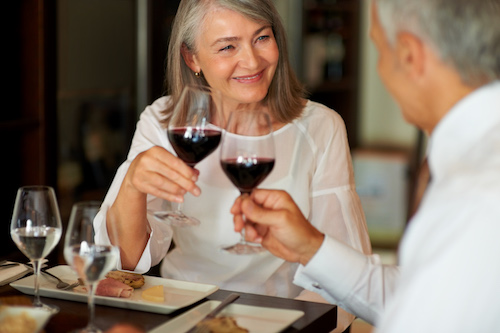 This study included 7,835 women who were enrolled in the Women’s Health Initiative trial and who were later diagnosed with breast cancer. Information about alcohol use was gathered from all of these women before they were diagnosed with breast cancer, and also was gathered on a subset of roughly 25% of women after diagnosis. Roughly 9% of these women reported that they never used alcohol and served as the control group for this study, whereas of the women who reported alcohol-use, most were fairly light drinkers and consumed less than 1 drink per day. Data showed that women who reported alcohol use prior to diagnosis had a significantly lower risk of all-cause mortality than those who did not drink. Moreover, alcohol intake either pre- or post-diagnosis was not associated with a higher risk of death either due to breast cancer or other causes.

This study, like most other studies on this topic, shows that moderate alcohol use is not associated with deaths due to breast cancer, and is associated with increased overall survival. Thus, if you are a breast cancer survivor who drinks alcohol, these data provide some reassurance that your drinking does not place you in mortal danger. However, survival is just one outcome, and although it is perhaps one of the most important, you may be interested in other outcomes, such as recurrence. To date, most studies that have addressed recurrence have found much higher rates in women who continue to drink. Also, if you are a survivor of head and neck cancer or other cancers that are strongly linked with alcohol, then you should not drink at all. Indeed, the decision to drink alcohol is complex and you need to carefully consider the type of cancer you have, the outcomes that are important to you, and you also may want to take into account your family history.